Faith for the Faithless: Lost Mine of Phandelver 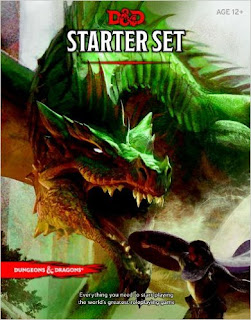 Greetings denizens of the inter-webs!  It is I, Otto von Quarzis, the Prophet.  In this ongoing series, I provide faith for the faithless masses that do not yet know the Known Truth.  In this installment, I point ye to Wizard's of the Coast's Lost Mine of Phandelver, an introductory adventure included in the D&D Starter Set.  The link will bring you to Amazon, where you can get this awesome adventure for a mere $13.07 (as of the writing of this post).

The adventure is also available on Fantasy Grounds, which is a fantastic Virtual Table Top (VTT).1 Whether you play this mighty introductory adventure over the webz or in person rolling the dice, you will be sure to be in for a treat.  For this adventure - NEVER - goes as planned!

I have personally experienced this adventure twice, once as a player and once as a Dungeon Master (DM)™² Both times much mayhem ensued.  It was glorious!

So, my first experience was right after D&D 5e came out.  This was my first inkling that this would be the game to end all games, the only true role-playing game, the Known Truth.  While it wasn't until years later that I would come to be touched by the Gygeson³, I still knew there was something special about this game.

A good friend of mine decided to run the adventure.  We were all excited - a new version of D&D was being released. We gobbled up the free starter rules that Wizards of the Coast published; we were already hooked.  Then... the s*** got real!! One of our party almost died in the first encounter with goblins.  This seems to be a common occurrence (same thing happened when I ran it years later).⁴  We got through the goblin caves... then everything went to hell.  We ended up taking over Phandalin.  This launched an epic (and I mean EPIC!!) campaign that lasted almost a year.  Probably, one of the longest contiguous⁵ campaigns I've been in since I was a kid.

So that brings me to the recent past present.  I recently ran this adventure, and while they did actually end up finishing it the way (sort of) the adventure writers planned for - getting there was anything but planned.  The adventurers managed to rampage through most of the encounters and were uncanny in finding the easiest paths.  However, their downfall was always the traps... I mean... they hit almost every single one!! It was like they had a "please spring trap on me" sign taped to their backs.

But, the best part is that they "negotiated"⁶ their way through many of the encounters.  They also gained two NPCs, Glog and Sorg, two adventurous goblins that ended up being tag alongs.  Glog ended up being an excellent french culinary trained cook (who recently opened a fantastic restaurant in Phandalin) and Sorg became a pretty bad-ass fighter.  He serves his new "boss" - the cleric of Rah, Darrus.

The party's warlock, Or-estees, also ended up picking up Glass staff's familiar - a rat,  which Or-estees promptly named Cheesers.  Needless to say, it was a pretty easy ambush as Or-estees kept Cheesers in his room at the Stonehill Inn.  Yup, that was a totally off-the-cuff encounter that made this DM's eyes water with delight.  Not even a published trap - but - traps!

In the end, this is a classic D&D adventure - it sets out a general framework, but leaves the action to the players and DM to decide.  The adventure walks the DM through the process of running a game, gives tips and tricks, and generally makes it easy for new DMs to ease into the game.  It is also a great intro adventure to D&D 5e for players.  Both the first time, as a player, and the second time, as a DM, I found it easing me into the 5e rules, while not hamstringing the creative license role-players have been taking for decades.

This is an adventure I encourage all of the faithful to play or run at least once.  It is a great beginning to a campaign.  While set in the Forgotten Realms, it is easy to migrate to your own campaign world, as my DM did the first time I played.  If you do prefer to play in Wizards of the Coast's default world, it is also a good intro to that world.  The use of factions is very interesting, and can definitely setup some interesting future campaign ideas.

Until next time - remember, D&D 5E - the Known Truth - believe!! Or perish in the fires of diceless!


1 If you are reading this blog, I am guessing you are familiar with VTTs and Otto spelling it out was superfluous, but, well.. .that's him.

4 Have to admit... he seems right about this. I've been with him and also surf the web in my spare time.  A hella lot of people die in that first encounter.  Suppose it is one way to get people to learn the death save system.

5 Longest campaign actually spans decades, but it has been stop and start - and month to month/week to week games have been sporadic.  This campaign actually went for a good year-ish on a bi-weekly/monthly basis.

6 By negotiated, he means they brow beat and intimidated until they got their way.  Yup, basically the lunch room bullies demanding the freshmens' (aka goblins') lunch money.
Posted by Quarzis at 3:57 PM